With the development of metallurgic skills, mirrors were among the first non-violent products created together with bells and sacred containers in the early bronze age. The disc-shape and the knob in the centre was an early development expressing the cosmic symbolism and the Axis - Mundi (the center of the universe). Chinese believe that the heavens were round and the earth square.The hole in the knob allowed a silk cord or scarf as connection between the cosmos and the practitioner. The four directions  mandala and the Zodiac are fundamental from the early designs until recent times. 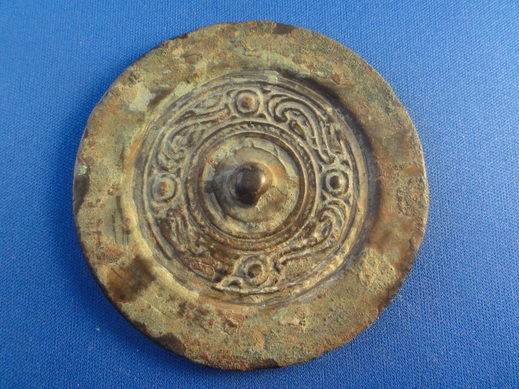 China Han Dynasty design but crafted in a later period. ( Tang or Sung )
Chinese Foundations
There is little doubt that the earliest mirrors were for the most part restricted to use in ancient cult and ritual practices. The ancient astrologers and soothsayers used it in divination and sun worship. Later, when the Taoists adopted the pantheistic teachings of Lao Tze and converted them to their own uses, they also adopted the ancient superstitions and beliefs. Among these trappings of cabalistic ritual were the demon-compelling sword and the spirit mirror. To this day these two insignia remain the most potent of the paraphernalia employed in Taoist magic. As the form of any invisible spirit haunting the earth will at once become visible when reflected in the mirror, it follows that the protection of the living becomes one of the most important functions of the mirror.  Chinese spirits, both good and bad, are supposed to throng the earth and plague the days and nights of the living. The power of the mirror to ward off evil influences from the living as well as the dead has given it inestimable value in the eyes of the Chinese.  To the present day, small glass mirrors, in place of the classic bronze of antiquity, may be found on many Chinese caskets and doors.

Many of these ancient  customs are rooted far back in Chinese history. Some of them are curiously analogous to our own Western folk lore and belief in magic. Scholars have done considerable work in this field , and it should prove a fascinating source of valuable comparative study in the future. 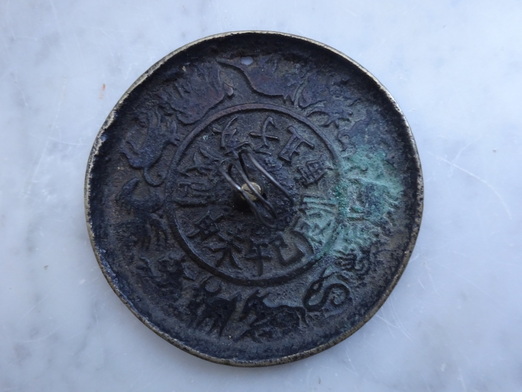 Buddhist initiation mirror
These mirrors where used in an initiation in the nature of the enlightened mind. At one point in the initiation, the Lama would show the adept the Melong and explain : " Your mind is like the mirror, in itself empty, but it will reflect everything that is exposed to it without changing, because it has no judgement or attachment on what it reflects. 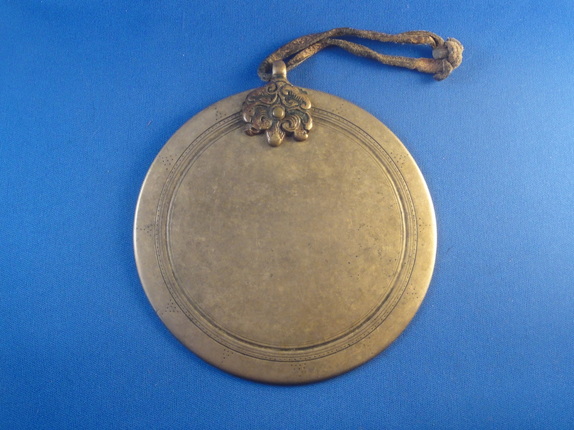 Chest mirrors or Hart protect mirrors are part of a costume or Ceremonial outfit of a Medium, a Monk, a Healer or a Shaman.
Their use is spread from Tibet till Siberia.
Their origin is in ancient warfare. warriors protected their most vital part with a mirror against arrows.
Shamans and Mediums need this protection for spiritual attack from spirits or black magic.
Also most of the Buddhist protectors wear a Chest Mirror.